From ‘Current Reports from overseas No.82’, I found this narrative of the ‘Raamsdonk Terrier Battle’ as featured in Panzerwrecks 18, pages 66-73:

Introduction
1. This report of an action by a troop of Sherman tanks and an infantry platoon affords a good example of quick thinking and initiative on the part of individual tank commanders. The country was such that tanks could only operate along roads, and the ﬂat open ﬁelds yielded no cover for infantry.

The plan
2. During the operations designed to clear the enemy from the south bank of the River Maas, a battalion of a Highland regiment, supported by one squadron of a Yeomanry tank regiment, were to advance through our forward positions in the area of Raamsdonk, with the task of seizing the bridge at Geertruidenburg, thereby cutting the enemy’s escape route to the north.

3. The enemy were known to hold the stretch of road north from Raamsdonk with machine guns and infantry anti-tank weapons, and unconﬁrmed reports stated that one Mark IV tank was also located in this area. An attack by tanks and dismounted infantry the previous day had proved unsuccessful and two tanks had been destroyed by enemy Bazookas.

4. It was decided to push a troop of tanks, and one platoon of the Highland battalion mounted in two Kangaroos, through and on to Laan by the road that turned west near the church, relying on speed and armour to overcome the opposition. If this project was successful a second troop, leading the rest of the company-— also mounted in Kangaroos—was to follow in their wake, leaving the mopping up to the remaining, dismounted companies. On arrival at Laan the leading company was to dismount and push on towards Geertruidenburg, supported by a troop of tanks. The other companies would follow up after the completion of mopping up operations in the Raamsdonk area.

6. The column advanced at a good speed, ﬁring into the houses on either side of the road, and were approaching the Red House at H plus 10, when the artillery concentrations, which had been directed on to the area of the church, lifted. On reaching the Red House Serjeant “T” ﬁred one round of HE at the White House, and a vivid green ﬂash followed by ﬂame and smoke, testiﬁed both to the accuracy of aim and to the happy thought that had inSpired the shooting. By this time SP Gun No. 1 had suddenly appeared on the left hand side of the road south of the church, having probably moved out from the White House area. Serjeant “T” himself did not see it, due to the smoke, but his gunner -Trooper “D” – spotted it and promptly put three AP rounds six inches apart into the front centre, thereby putting the SP gun out of action. The driver – Trooper “O” – kept going and just managed to squeeze past this obstacle, but rounding the bend opposite the church, he swerved to avoid some rubble and the right hand bank gave way, with the result that the tank dropped four feet into a ditch, at an angle of 30 degrees. It was then that Serjeant “T” spotted SP Gun No. 2 through the smoke; the gunner traversed and brewed it up with the ﬁrst shot from their position in the ditch. So far, owing to quick and accurate shooting, two SP guns had been knocked out before either had been able to ﬁre a shot.

7. Meanwhile, Lieutenant “M” passed SP Gun No. 1, and probably due to the smoke, had the misfortune to ditch himself. The Kangaroo that followed, under a legitimate misapprehension that the SP gun was still in action, most gallantly charged it, lost a right hand sprocket in the process, skidded and also ended up in the ditch. The commander of the second Kangaroo, to whom the situation appeared far from clear, gave the order to halt.

8. The advance had now come to a standstill and the infantry platoon dismounted from the two Kangaroos and reorganised in the area of the church.

9. It was then that Serjeant “T” got through to the squadron commander on the wireless and, considering the circumstances, gave a clear picture of what was happening, and so enabled the commanding ofﬁcer of the infantry battalion to size up the situation and to despatch a second troop of tanks and platoon of infantry round by the southern road to Laan. Serjeant “T” also rang up corporal “P” and ordered him to try and come up past the obstacle in order to give protection on the front and left ﬂank. Corporal “P” duly succeeded and took up a position near Serjeant “T” to where he shot up three 20 millimetre anti-aircraft guns mounted on half tracked vehicles and compelled the enemy infantry, who were ﬁring their Spandaus and riﬂes at the ditched tanks, to run for cover. Later, by patrolling up and down the road, he scotched all enemy attempts to approach and destroy the tanks and Kangaroos.

10. Corporal “G”, for his part, had attempted to follow Corporal “P”, but since his tank was the ﬁfth vehicle to swing round SP Gun No. 1, the bank had become so loosened that it gave way and he was ditched.

11. Lieutenant “M” dismounted from his tank to try and contact the platoon commander in the area of the church and was killed by Spandau ﬁre.

12. By this time SP Gun No. 3 had approached from Raamsdonk with the object of taking the column in rear. It dealt faithfully with the second Kangaroo and, believing Corporal “G” to be out of action, drove up and ground to a standstill immediately in front of his ditched tank. Corporal “G’s” gunner was just able to traverse the necessary few inches to get on, but even then could only see the top six inches of the target owing to the steep angle at which his tank rested in the ditch. But he let ﬂy with a round of HE and the SP gun straightway burst into ﬂames. At the same time Corporal “P” spotted this SP gun through the smoke and put two rounds of AP into it from the opposite direction.

13. During the whole period covered by this operation, the column was subjected to heavy shelling and ﬁred at from all directions by Spandaus. The crews of the ditched tanks remained inside and used Sten guns and grenades as opportunities appeared. The White House, three SP guns, and two Kangaroos were on ﬁre, and the whole area, was wreathed in smoke. Some time later Lieutenant “M’s” tank, caught ﬁre and added to, the conﬂagration, and the crew baled out and joined forces with the infantry platoon. At the same time Serjeant “T” shouted across to the platoon commander and told him that the bulk of the battalion were going round by a different route and that the platoon was to hold on until dark and then to rejoin the battalion as best it could. He also communicated with Corporal “P”, kept the situation under control, and found time to send back information. The squadron commander also talked direct to Corporal.“P” who gave him a clear picture of the
situation.

14. Two further half-track‘s were destroyed and at approximately 1830 hours, just as it was getting dark and the shelling and explosions were dying down, orders were given to withdraw. 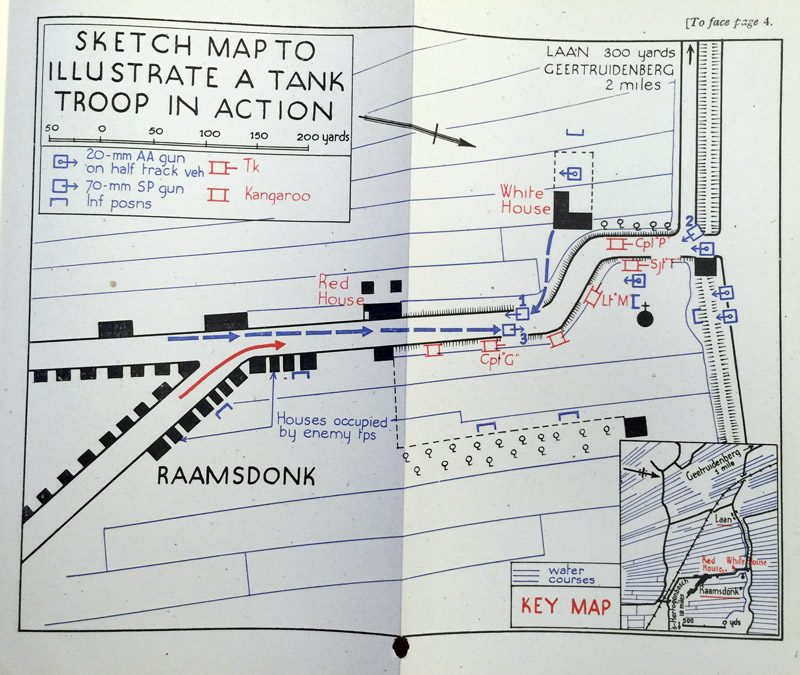 Like the sound of all that? Get the lowdown in photos in Panzerwrecks 18. 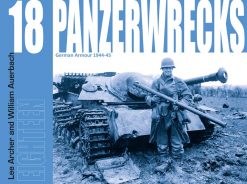 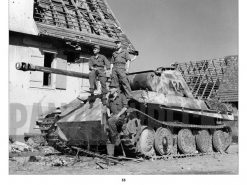